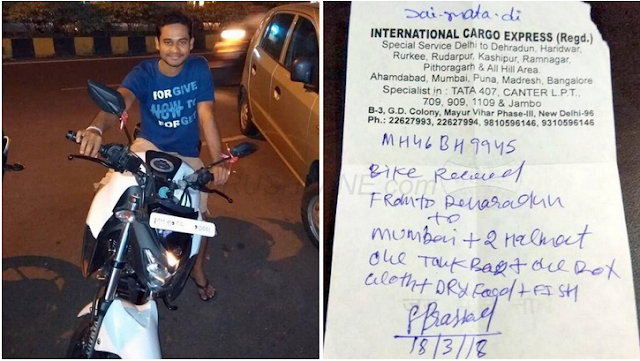 “Guys this is incident happened with me when I was on Mumbai- Uttarakhand Ride. I rode from Mumbai to Uttarakhand on my 2 months old Yamaha Fz 25 and due to some personal reasons I had to return back urgently so the only option left was taking a flight back to Mumbai & transporting bike through some vehicle carrier. I contacted few of the Reputed carriers including VRL and Gati, but VRL was quoting high and Gati’s executive denied to take the shipment on short notice. I found Transtech Packers & movers Pvt Ltd on internet and got to know its an ISO certified company so I decided to ship my bike through them.

After having a talk with their Executive and negotiating a bit, the amount for transportation was finalized Rs.5500.00 for door to door Pick up & Drop service which is pretty reasonable. On 18th March 6:00 pm, I myself dropped the bike to their Ware house to avoid any mishandling by their pick up boys. 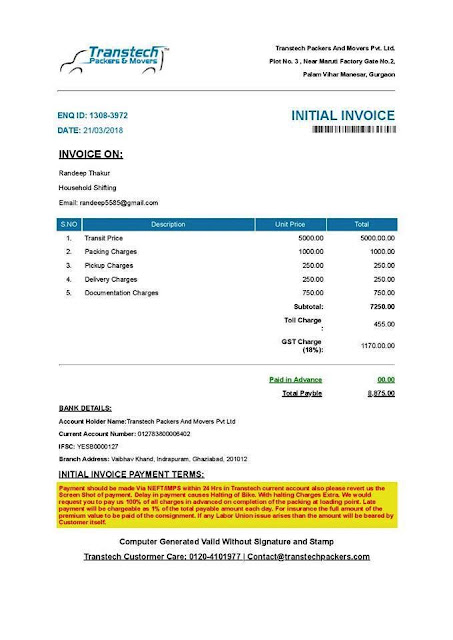 The bike was supposed to be packed and kept in the truck in front of me as per our discussion but the guy refused and told to leave the bike as they will be doing it in the night. I left the bike and got an handwritten receipt. This so called warehouse was actually a 10×10 feet rest room of drivers owned by International Cargo Express( Sub contractor for transportation), a truck agency which is in tie-up with Transtech(I came to know this later from the guy who collected the bike).

The bike was supposed to reach Mumbai after 5 days and I was in Mumbai by that time. I received an Invoice of Rs. 8750.00 which was supposed to be of Rs.5500.00 as agreed. Upon enquiring Mr. Sudheer told me that packing charges, Toll charges, pick-up & Delivery charges etc are always charged extra to customer and also told that if I don’t pay the Invoice amount within 24 Hrs, a late fee will be charged and they will hold the bike. 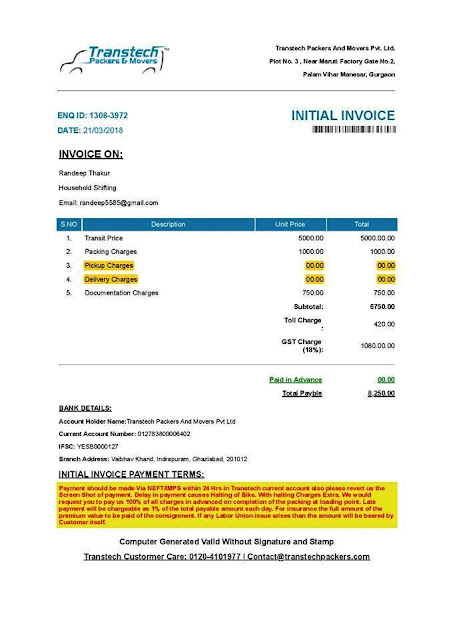 After having a good argument of 15 mins he agreed to waive pick up & drop charges of Rs. 500.00. I received revised invoice while I was talking on the phone (what a quick service!). I paid the amount of Rs.8250.00 instantly to avoid any delay in delivery of bike.

Now the real game started. After receiving the amount these people started ignoring me. They didn’t receive my calls, nor replied to emails, but replied on WhatsApp after every 2-3 days that I will get my bike tomorrow. The Landline numbers of the company also were off.

Website tracking was showing fake location of bike and it was updated when I used to call them continuously. Upon doing some detailed search over Internet I came to know that there is no such office on the address mentioned in Invoice & Pick-up receipt.

Also the office address was Gurgaon & Bank branch was Ghaziabad, UP. After waiting for 20 days I decided to file an police complaint against them. So I filed an FIR at Dehradun Police and messaged Mr. Sudheer accordingly. After seeing this message he replied that we didn’t get any phone calls from you neither got any emails from you, do whatever you want to.

After chasing these morons for a month, the bike was found at Noida in a parked truck No. DL-1LS 2594 and covered with tarpaulin. After having talk with owner of the truck, the same truck was driven to Mumbai by different driver who was continuous in touch with me and yesterday delivered the bike at Kalamboli Circle at 1:00 am in the Night.

The bike was not packed and fully covered in dust. There are few scratches on bike, Right Tank Panel is Damaged by wooden boxes in Truck, exhaust pipe beneath engine is dented (may be due to heavy impact while putting the bike in truck). Even the bike is ridden for more than 50 kms. Don’t have any clue for what they have used my bike. But I am happy that I got my snowy back.

I am posting this incident just to make my riding brothers aware that there are such fraud transport companies who can steal your bike. Not everyone is lucky enough to get a brand new bike back from thieves.”

So how exactly did he get to know the location of his bike – Randeep says, “These moving companies dont have their own trucks they hire it. Warehose guy gave the contact number of truck owner when he was told that we have filed an FIR against you guys.”

We are glad that Randeep managed to get his bike back and are grateful that he has shared the experience with the community.

One has to say that he has been extremely lucky to get his bike back. Last year, some really expensive motorcycles, including BMW and Triumph were siphoned off by transport companies. No one ever got to know what happened to them.n most cases, you never get to see you bike ever again. He has shared the names and details of the transport company below. Bikers are advised to be extra careful while using the services of lesser known companies. 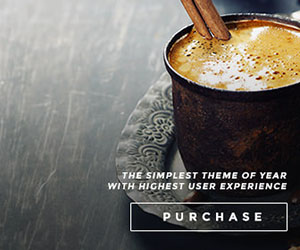